“Our approach is to farm the individual vines so that the fruit they produce all ripens together as a group. We’re trying to do that by employing technology that allows us to analyze macro-level data to help us understand the vineyard at the micro-level. ”

Geographic information systems, which are used to store, analyze and manage such geographic data as soil types, cropping patterns and rainfall, are the future of farming, says Christian Palmaz, president of Palmaz Vineyards, in the Coombsville AVA, near Napa, Calif.

He manages day-to-day operation of the second-generation family vineyard and winery business, which was established in the late 1990s.

As Palmaz sees it, making good vineyard management decisions starts with a clear understanding about what’s going on with the vines. And, that’s where GIS can pay big dividends

In his case, he uses a GIS system that features digital information from infrared images of his vineyards taken twice a week by a camera-equipped aircraft flying at an altitude of 10,000 feet and a proprietary software program that interprets this data in terms of how the vines are developing.

“The best wine from any vineyard is made the day the grapes come through the door at the winery,” he says. “Too much is at stake to spend the whole year growing the grapes, only to have the winemaker walk down the row on Sept. 20 and tell us there’s an area next to a creek or near a grove of trees where the fruit is a little under-ripe compared to the rest. That’s too late for us to correct the problem.”

Traditionally, all the vines in a vineyard have been farmed as a group, based on the lowest common denominator, he says. For example, that might include applying enough water to meet the needs of the most-stressed vines in the block, regardless of how vigorously other vines are growing.

“Our approach is to farm the individual vines so that the fruit they produce all ripens together as a group,” Palmaz says. “We’re trying to do that by employing technology that allows us to analyze macro-level data to help us understand the vineyard at the micro-level.” 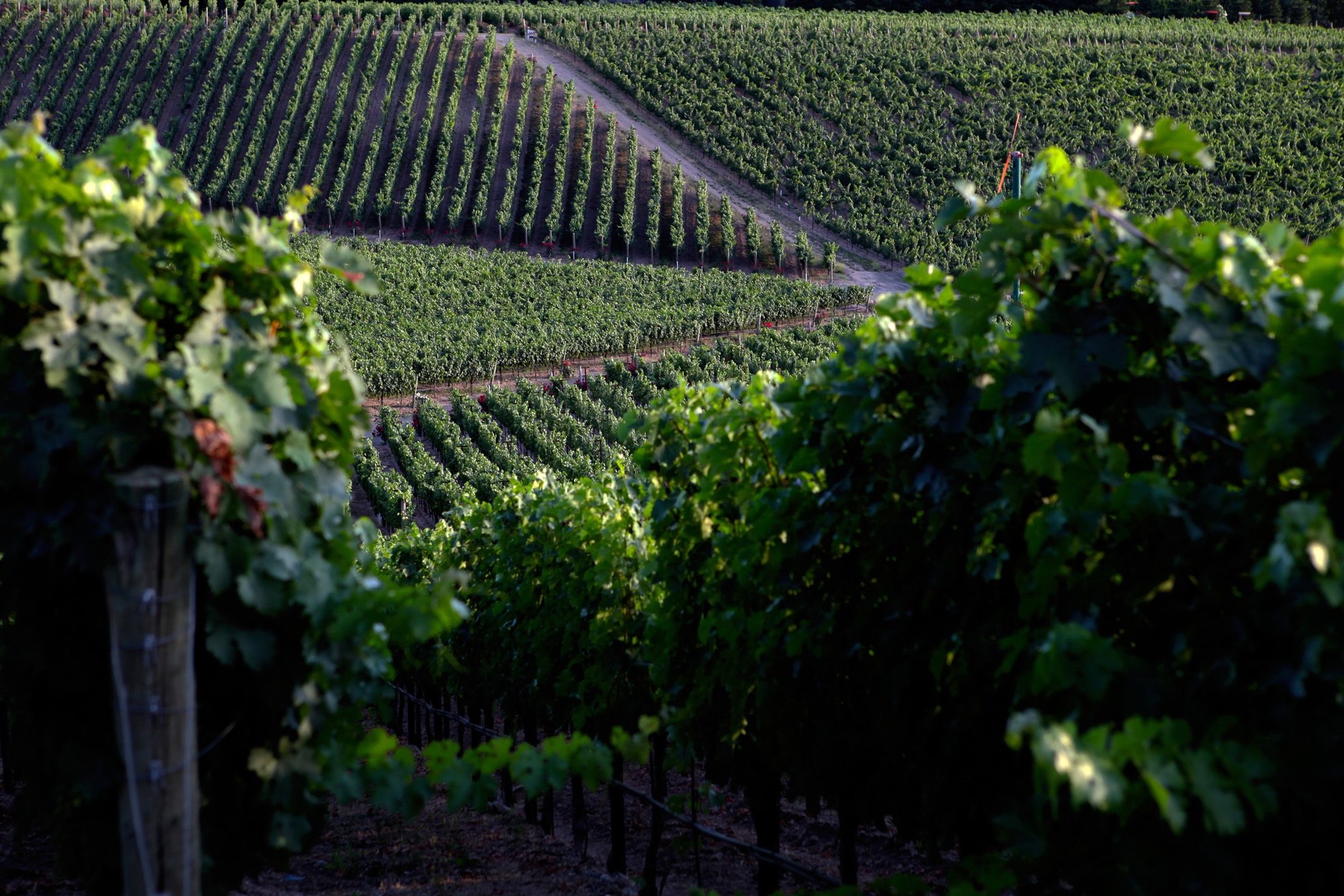 His 64 acres of vines are divided among 46 blocks, each featuring a distinct combination of soil type, rootstock and clone. They span three elevations of Mount George – one located 400 feet above sea level, another at the 1,200-foot level and the third on top of the mountain at an elevation of 1,400 feet.

Chardonnay, Muscat and Riesling make up the white varieties. The selection of reds includes Cabernet Franc, Cabernet Sauvignon, Grenache, Malbec, Merlot and Petite Verdot. The vines are tended sustainably by a highly-trained field staff of 13 full-time employees who follow concepts of organic, biodynamic and erosion-control practices, ranging from diverse winter cover crops to deficit-irrigation in the summer.

The grapes are made into super-premium wines in the Palmaz Vineyards’ gravity-flow and gravity-finish subterranean winery, the Cave.

Built into an 18-story cavern in the flank of Mount George, the winery features an engineered maze of tunnels and domes carved into rock at the base of Mount George, the natural temperature control of a cave and sophisticated monitoring systems for each of 24 fermentation tanks that project a broad range of data, including thermal imaging, onto the ceiling of the dome.

Such attention to detail in the winery goes a long way in explaining the quest by Palmaz to clearly understand his vines at the micro-level.

The software developed to analyze the infrared aerial images of his vineyards is named VIGOR (Vineyard Infrared Growth Optical Recognition). Designed to improve his precision in drip-irrigating his vines, VIGOR offers a practical alternative to the impractical task of measuring soil moisture and evapotranspiration rates for each and every vine, Palmaz says.. 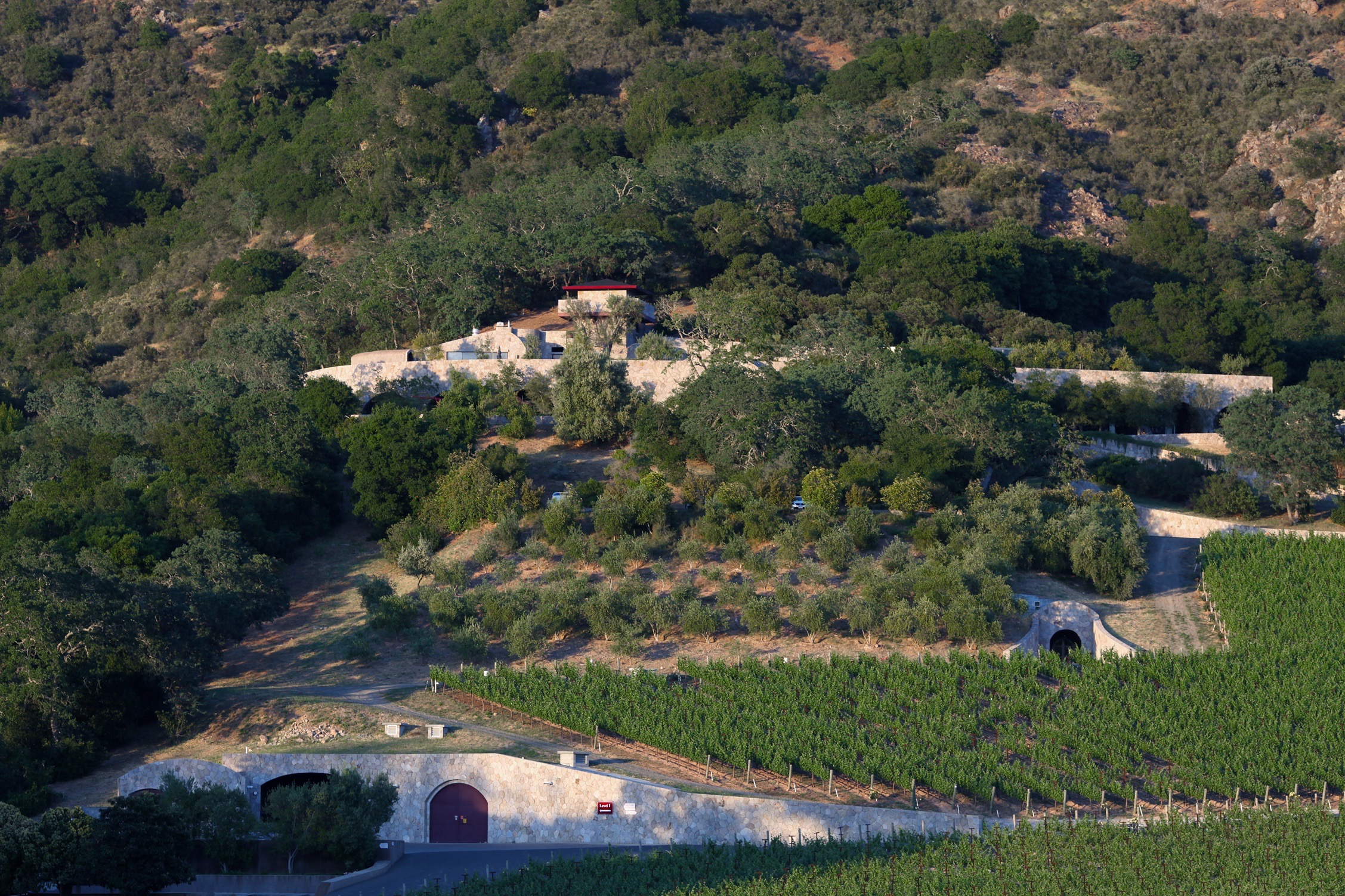 The images, taken twice a week, are used to adjust the irrigation rates for the following day. From this image, he can then extract the data for each individual parcel of his vineyards.

Based on the intensity of infrared light reflected from the leaf surfaces of the vines in that parcel, the program assigns the vines a value from 0 – lowest vigor – to 255 – highest vigor.

These values appear on a computer screen in a graphic format called a histogram with differently-colored vertical bars representing the probable distribution of vines at slightly different vigor levels.

The taller the bars, the greater the number of vines at that given level of growth. One particular shade of blue might represent vines in the 70- to 75-value range of growth while those that had advanced to the 150 to 155 growth stage value would be shown in a certain hue of orange. The histogram for a parcel where vines represented a wide range of growth would appear as a rainbow of colors. A block with more uniform maturity would show fewer colors

Palmaz’ role is to alter his irrigation rates as needed to reduce this variation or standard deviation among all the vines.

“The histogram is a report card, or empirical grade, on how well I’m adjusting the water application rates as the growth stages of the vines change from one irrigation to the next,” he says. “A decreasing deviation among the grouping of bars means the vines are maturing at similar rates. However, if the bars are spaced more widely apart, then I need to check that area of the vineyard parcel to see if an underlying spring, a broken irrigation line or something else is affecting vine growth and correct the problem.”

“If I’m irrigating properly, I should be making fewer and finer adjustments in irrigation as the season progresses, because I’ve been able to reduce the variability of the vines’ growth rates so that by harvest, hopefully, all the grapes ripen more uniformly.”

None of this technology is new to agriculture, says Palmaz, who studied GIS technology at Trinity University and its application for irrigating corn and soybeans in the Midwest. “Growers there have been using similar programs combined with satellite images of the fields to adjust water and fertilizer application rates as center pivot systems travel across soils dispersing different water amounts and nutrient levels.

Currently, Palmaz is using VIGOR to adjust irrigation rates by selecting multiple lines based on the different fixed-rate application of the emitters on the various lines.

However, VIGOR is designed to work also with a variable flow emitter concept.

In fact, Palmaz envisions the time when software would allow him to adjust each variable-flow emitter wirelessly for every individual vine as needed.