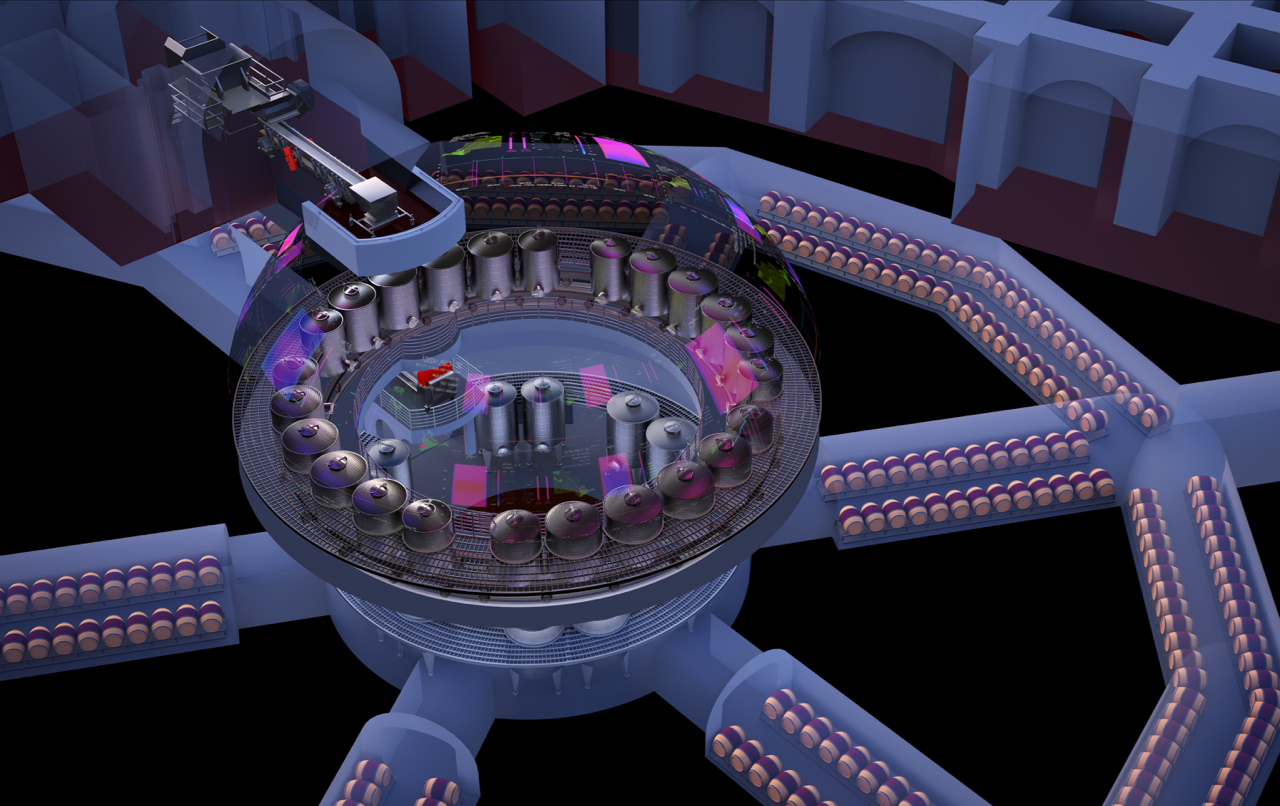 TO THE NAKED EYE, this 1,877-foot mountain along Napa Valley’s eastern edge seems like any other. But deep in the belly of Mt. George, there’s a five-level, high-tech winery, with a sophisticated computer system and display that rivals NASA’s Mission Control Center.

In a valley that’s home to a medieval Tuscan castle, a Persian palace and a giant Bunny Foo Foo, Palmaz Vineyards may be the most unusual winery around.

Julio and Amalia Palmaz are Napa vintners by way of Buenos Aires. In the 1970s, Julio, an interventional radiologist, moved the family to the Bay Area to conduct research at UC Davis that led to the groundbreaking balloon-expandable coronary stent, an invention that helps keep heart arteries open. Johnson & Johnson licensed his stent in 1992. And that accomplishment gave the Palmazes the means to create their eponymous winery, blending science and technology with the art of winemaking.

Winery president Christian Palmaz and his sister Florencia, who runs the winery’s business and marketing end, remember growing up in a household where wine was always a presence. When they lived in the Bay Area in the 1970s, their parents visited Napa Valley often.

“My mother and father were huge fans of the Moscato Amabile by Louis Martini,” Florencia recalls. She remembers riding in the back seat of her parents’ white Triumph Spitfire, sitting next to an empty cooler as they drove to the St. Helena winery to buy this slightly sweet, fizzy wine.

“I always knew the Amabile release years, because there was no orange juice or milk in the refrigerator for at least three weeks,” Florencia says, laughing heartily. “They loaded up for the whole year. The bottles took up the whole fridge. There was no cereal until they had a few dinner parties.”

Julio and Amalia bought the historic Cedar Knoll Vineyard, a 610-acre property with a grand house in Napa, established by Henry Hagen in 1876. Hagen’s winery did not survive Prohibition. By the time the Palmazes acquired it in the 1990s, the vineyard needed a lot of work. They planted 16 acres of vines facing different angles for the best sun exposure at 300, 1,200 and 1,400 feet, resulting in three major microclimate growing areas — and many separate vineyard lots.

To keep those lots separate during winemaking, and to treat the grapes as gently as possible, the Palmazes needed a different kind of winery. They wanted to take advantage of gravity, not just during grape pressing, fermenting and barrel aging, but all the way through to blending, filtering and bottling. At most wineries, the gravity-flow process stops at the barrel.

Their plan required an underground, 240-foot tall winery with five levels. The seven-year project was still underway when Christian, who is also a helicopter pilot, joined the team in 2007, overseeing vineyard and winery operations. He may be the youngest member of the family, but he has made perhaps the biggest impact on winemaking here.

Inside the winery, we walk to the end of a platform overlooking 24 stainless steel fermentation tanks. All of a sudden, 24 colorful graphic displays appear on the dome ceiling, one over each tank. With his iPhone, Christian has just turned on FILCS, a proprietary high-tech computer analysis system he helped develop to track fermentation. Suddenly it feels as if we are on the “Star Trek” Enterprise bridge — the J.J. Abrams one, not the 1960s version.

FILCS stands for Fermentation Intelligent Logic Control System. “You are looking at fermentation playing back at 3,000 percent speed, watching the environments change,” Christian says. “We have a better idea of what’s happening during fermentation, and this allows winemakers Tina Mitchell and Mia Klein to be more focused on style.”

FILCS is also symbolic of Julio’s influence. “Dad always tells us, go to the basic science to solve problems,” Florencia says. “He empowers us, completely inappropriately though. Is this place financially sound? Hell no. Are we given carte blanche on projects like FILCS that throws projections on the ceiling? Yes.”

But the ultimate payoff is in the wine glass. “In 2004, we had a milestone, the first year we deposited the grapes in the tanks here on property,” Florencia says, “and the whole tannin structure of the wine softened up immediately. Vintage 2007 was our next milestone, because Christian started working in the vineyard, and we (saw) polish.”

Of course, Christian adds, that even with all the fancy software and technology, wine is still made in the vineyard.

“But hopefully,” Florencia says, “we can screw up a lot less.”

Palmaz welcomes visitors for a two-hour winery tour and tasting, paired with small bites ($80 per person for small groups, $95 per person for groups of 12 of more) by appointment.

You can experience Palmaz in your own home thanks to a new two-volume book set ($130). Christian Palmaz’s “Palmaz Vineyards: Tradition, Terroir & Technology” is a photo-rich look at vineyard and winery operations, complete with blueprint graphic representations of the five winemaking levels. Florencia Palmaz’s “Palmaz Vineyards: At the Table & Around the Fire” chronicles food and wine pairings and entertaining at Palmaz over 15 years.